i really wasn’t sure why i was taking this journey, a journey back to a time and a place where i really didn’t have any good memories… my high school years were just that… empty and painful to remember… did i come back to salvage at least one happy memory of a high school event… that is what i thought, and that is originally why i decided to make this journey, but in the process i realized i was returning to find more about that quiet kid, jules… who was he? how did my classmates perceive him then and how would they embrace tess today…
i’ll admit that i was nervous and scared… what was i really going to accomplish or would this just be another brutal lesson that i shouldn’t try to relive a time that i can never have back…. being transgender i learned that rather quickly… i remember when i received my invitation to my reunion how i just tossed it aside, laughing and thinking why would i even consider doing this…
i’m just a few weeks from my 3rd anniversary of coming out, coming out after living with a secret for 66 years…. my transition has been a long hard process for me, one filled with more tears and depression then i ever had in the past but it was also filled with a happiness and a sense of peace that i never felt before… but deep in my heart i will always cry out, “why did i have to be transgender, why couldn’t i have been just like you”
when i “came out” to my classmates on the Reunion Facebook site i really didn’t know what to expect… but what i did find was a lot of love and acceptance… as the months passed by, i began to keep in touch with many of my old classmates…. they followed my Facebook posts and some even my blog, tessjulianna.blog….. and in the process i knew i had a group of people who would have my back throughout this journey…. to Kathi and Nancy i can never thank you enough….
as the wheels of my plane touched down in Philadelphia i was filled with a sense of excitement… tess had come a long way in the pass year… over 30 hours i laid in an operating room, i had my gender reassignment surgery, a surgery i waited a lifetime to have plus several other surgeries to feminize my appearance… i had just completed a beautiful summer with Princess Cruises in Alaska as tess, and all i received was love and acceptance… so i thought why should this be any different….

but i was running scared… i asked Nancy and Kathi if i could meet them for a breakfast on Friday morning… i didn’t want to walk into this whole weekend not physically knowing anybody…. well it was a beautiful time and as i sat there, in that restaurant booth, i kept seeing faces that i loved in the past but also faces of friends i had today and that was the important part…. we parted and i was excited for our evening get-together at the high school’s Homecoming football game…
before going to the game i drove silently around Stratford, “his” old neighborhood, places that had good memories and places where my dysphoria brought just empty and frustrating times…. i began to think that this all was going to be a big mistake….. i parked near the house i lived in, 16 Sleepy Hollow Rd….. i saw where my bedroom was, where every night, for a lifetime, i prayed that i would wake up no longer as “him” only to wake up with my tears…. why couldn’t i just been like you…. how many times did i scream those words… and as i drove up to the my old high school and parked my car i panicked…. i fought back tears as i looked at my old high school… so many memories were crashing down on me… the pain, the frustration….. what the hell was i doing here… it took me a lifetime to get the courage to open my car door and join my classmates that were arriving, but i did… it began with the typical awkward introductions but many recognized me from my Facebook post… there were hugs and beautiful words spoken, admiration for my courage… i began to feel everything would be alright…. but eventually i found myself alone, alone and looking out over the school’s athletic fields and thats when my tears began….
later that night i wrote these words about that moment:

From my journal…
laying in bed thinking about the past day… i came back for my 50th HS Reunion… i was standing alone with tears staining my face as i looked over the HS’s athletic fields…. the fields of my failed dreams…. yes i came back and i did find acceptance and love but what i realized i really came back to find was why “he” had to cry… everything that should of been, everything that never happened…. i would of given anything to be you….. i would love to have your thoughts… hell i would give you mine in a second… but i don’t see anybody standing in line wanting to be me… wanting to be trans
“fields of dreams”

tears stain my face
hell they rained down this face forever…
is it “she” or “him” standing there
standing there looking over this “field of dreams”
i wish i knew…..
i walked on those fields so long ago
wanting
trying
to make dreams
but my dreams were not to be had
had on those field of green…
no
no he just locked the door a hundred times
always afraid that handle would turn,
turn and the door opens
and his field of dreams
dreams he could never share
would shatter your fields of dreams…..

but from that night i will always treasure this photo… Joe, tess and Pat… three amigos 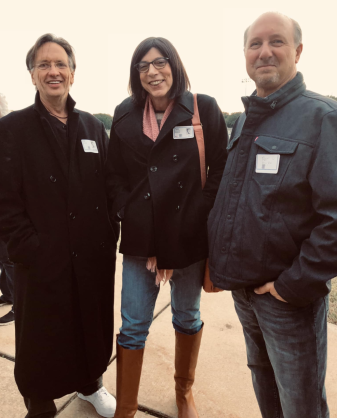 Saturday Oct. 20th
today was the big day… a chaotic parade of thoughts kept me company throughout the day….. i was excited, i was scared, would i be able to mingle, laugh and socialize or would i find myself alone, alone and just watching… i brought three different outfits to wear that night and i couldn’t decide which would be the perfect look… i wanted all my classmates to see a beautiful woman, proud of who she was… proud of the journey she took to become that woman… and as i dressed i choose to wear the name tag that had my beautiful name, a name i choose to live the rest of my life with but i chose to use the name tag that had jules’s graduation photo on it, after all that was who all these people had memories of…

the evening was so funny in a way… here we were, 50 years later and all of us had aged… very few people i could easily recognize…. with most people we played the game of looking at the graduation photo on the name tag and their name… i will admit though, i was more anxious to see all those girls, girls that i never had the courage to talk to because i was a prisoner of my dysphoria… i wanted to finally talk to them, laugh with them and most importantly i wanted to hear about what they thought of that quiet kid named jules….. i heard a lot of “why didn’t you talk to me… you were so quiet”…. to many i confessed i wanted to talk to them, i wanted to ask them out, i even joked to some “why didn’t you ask me out”… it was all so beautiful… and all their words of that quiet kid just brought tears to my eyes… people did notice me… many spoke of my smile and even my humor…. so many things that i had forgotten… so many thing i never knew… so many things i will never forget

and as the evening was ending i found myself as i knew i would, sitting alone and just watching my classmates, wishing things would of been different, wishing that i didn’t have to be jules just to be tess… so many whys… and as i was leaving i talked briefly with two beautiful girls, Susan and Roberta (you know who you are)… i wanted to say so much more to you both… i didn’t want to have to walk away, no i wanted those minutes to last forever… your words to me, your words of jules were so beautiful, i wanted to hug you both forever but i was crashing rapidly and i was trying to fight back my depression and so i walked to my car with tears staining my face… that night i slept with tears once again
Monday Oct. 22
i was packing up…. so many feelings and thoughts i had to process… i needed time with my journal to write what i had to write… a phone call… Joe Shoop called to say goodbye to both tess and jules…. his words were so beautiful, i had tears running down my face as i listened and it was in those moments i realized that i got everything i wanted from this trip… i knew it was a beautiful journey i had taken, a journey i took both for tess and for jules… thank you joe and thank you so much my two new girlfriends, Kathi and Nancy
tess julianna 10/22/18